WPCS’s group of fifth graders beat out students from Stetser Elementary, Main Street Elementary and Chester-Upland School of the Arts (CUSA) during the city’s 7th Annual Heritage Bowl on February 4, 2020. The students were challenged to tally 20 points by correctly answering questions in the jeopardy-styled game, which focuses on facts surrounding African-American and city of Chester history. Coincidentally, the WPCS team successfully answered the opening and final question of the game.

This year marks the 7th consecutive year the city of Chester’s Department of Parks, Recreation and Public Property has hosted the Heritage Bowl.  Annually, the event takes place during the first week of February to coincide with Black History Month. “It’s very important that we know what our people have done,” said Councilwoman Elizabeth Williams. Williams, who also serves as Director of Parks, Recreation and Public Property is a vocal advocate for educational and recreational youth opportunities in the city. “Education is important and being able to make learning fun is equally as important. This event encourages reading and research of our history. Both of these things can take our young people places.”

In preparation for the event, the city creates a study guide that is dropped off to each school at least one-month prior to the event.  Sheryl Alston, a 5th-grade teacher at CUSA accompanied her school’s team to this year’s Heritage Bowl.  For her, the event sparked a sense of purpose for the students. “It helps to boast their morale and puts their mind into a positive light,” said Alston. Alston also noted that participation in the competition for CUSA children is voluntary. “Each student gets their own packet.  They can study it as a group or team. Studying is done on their own time and some class time.”

While students at CUSA participate as volunteers, other schools have a different process of solidifying their team members.  “Students get excited to be chosen,” said Ivory Bostick, a 5th-grade ELA Social Studies teacher at WPCS. Bostick, who has been with WPCS for five-years, notes that having the competition at the beginning of February helps to set the tone for the entire school to learn more black history lessons and facts. 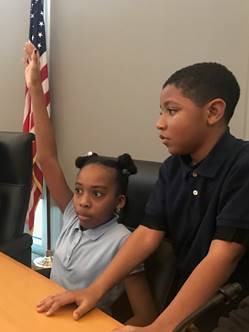 Once again, Duane Lee, the city’s Parks and Recreation Manager served as the game host.  As Lee fired off questions to the student participants, he relied on the audience to determine which team raised their hand first in order to answer his question. “This game encourages teamwork in every aspect,” said Lee. “We have the students who study and play the game. We have parents and teachers who come here to support the children and help me keep things in order. And we also have city officials who stop in and offer words of encouragement to the students.”

At the end of the game, several city officials spoke to the students about the importance of reading and getting an education.  Mayor Thaddeus Kirkland posed a trivia question of his own to the students and gave the winner $10 for successfully guessing his alma mater. Councilman William “Al” Jacobs highlighted the significance of the event, saying in part, “I want you all to keep in mind, competition is great but the fact that you all participated and had fun is what matters.”

ABOUT THE HERITAGE BOWL:

This is the seventh consecutive year the city of Chester’s Department of Parks, Recreation and Public Property has hosted the Heritage Bowl at Chester City Hall. Under the direction of Councilwoman Elizabeth Williams, the event was created as a medium to encourage healthy competition for local grade school children during Black History Month.

To prepare for the competition, the students were given a 50-page study guide. The study guide consists of facts that include key dates, inventions and notable figures in African American and city of Chester history.

The Heritage Bowl trophy, which was upgraded to a bigger size this year, will now live at Widener-Partnership Charter School until the 2021 competition. All students who participated in this year’s game received a participation medal.

All attendees were treated to lunch.