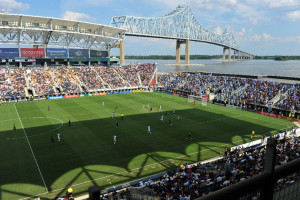 With the home opening game kicking off the season June 2010, the Philadelphia Union has not only brought major league soccer to the city, but also jobs and new recreation opportunities for Chester residents. Along with being the site for this year’s Chester Riverfront Ramble, this multi-use stadium provides scenic views of the Commodore Barry Bridge and its surrounding grounds have significantly enhanced the Chester waterfront.

As part of an underlying strategy for revitalization and redevelopment, the City of Chester is seeking to reconnect the City and its residents to its waterfront on the Delaware River. For this reason, the City acquired an additional 1,400 feet of land to extend the Chester Riverwalk along the Delaware River. Starting at Highland Avenue and winding its way along the river past the stadium, this pedestrian and bike path stretches all the way to Norris Street for a total of one mile.

This remarkable transformation of a formerly inaccessible waterfront is the direct result of City Council decisions made years ago to reserve the rights to the riverwalk land until the funds became available.  With the addition of the Chester Riverwalk to the existing facilities on the waterfront, including the boat ramps and new green space, the City of Chester has become one of the best places in the entire Philadelphia region to see and interact with the Delaware River.

As an existing brownfield site, a significant benefit of this development will result in a substantial level of environmental cleanup, which is being closely monitored by the Pennsylvania Department of Environmental Protection.