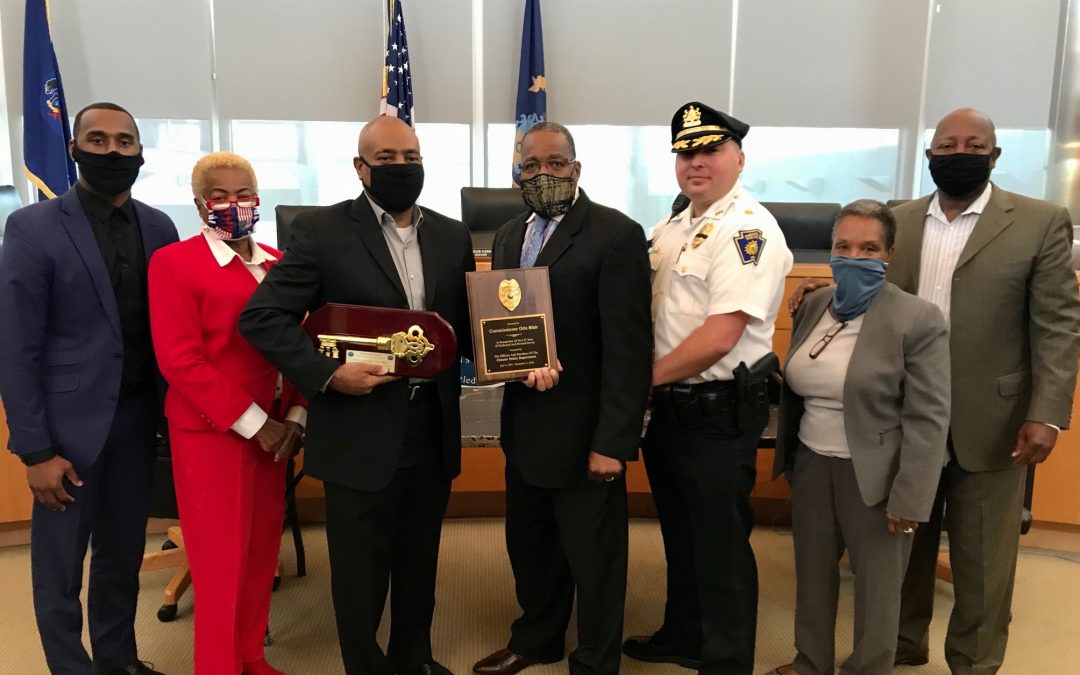 Picture Caption: Chester Police Commissioner Otis Blair (3rd from L) takes a picture with Mayor Kirkland, Chester City Councilmembers and Deputy Commissioner Steven Gretsky after announcing his retirement and being presented with the Key to the City award during City Council Meeting on September 23.

The 27-year-veteran received the Key to the City award during the meeting, which was presented by mayor and council in recognition of his dedication and service to the community as a law enforcement official.

While accepting the Key to the City award, Blair spent several minutes reflecting on his first years on the job in addition to honoring fallen Chester Police Officer Michael Beverly, who he credits with being an influence on his law enforcement career. “The reason I am here today is because of Corporal Mike Beverley,” said Blair. Blair referenced a happenstance meeting between the two men, where Officer Beverly urged him to apply to the Chester Police Department as he was awaiting to hear from several other law enforcement entities outside of the city. Blair added, “27 years flew by. I’ve had the pleasure of working with some of the finest police officers, both men and women in this country—who give everything they have with little they have.”

Mayor Kirkland who heads the Police Department as Director of Public Affairs offered words of support to Blair.  “As the mayor, it’s been a pleasure having you as the Commissioner of our police department,” stated Mayor Kirkland. “You’ve shown nothing but professionalism, commitment and dedication to this city, to this council and to your colleagues. We appreciate all of the heartfelt love you’ve shown to this community through the years.”

Blair was also presented with a 5 x 7 inch plaque adorned with a replica police badge by the Chester Police Department.  Deputy Commissioner Steven Gretsky and Major Katrina Blackwell both spoke about Blair’s leadership and dedication to the job. Major Blackwell recited a poem and emphatically repeated to Blair to, “really retire and enjoy it.”

Blair began working for the Chester Police Department on July 6, 1993 as a patrol officer. During his law enforcement career, he served in several positions, which included time in the narcotics division, and promotions to the rank of Sergeant, Captain and Deputy Commissioner.  In 2017, Mayor Kirkland appointed him to the rank of Commissioner.

Within his first two years serving as Commissioner, Chester experienced a drop in “total crime”. Under Blair, the city also saw a 38 percent decrease in the number of homicides from 2017 to 2018 –the lowest number recorded since 2009.

Board of Revision of Taxes