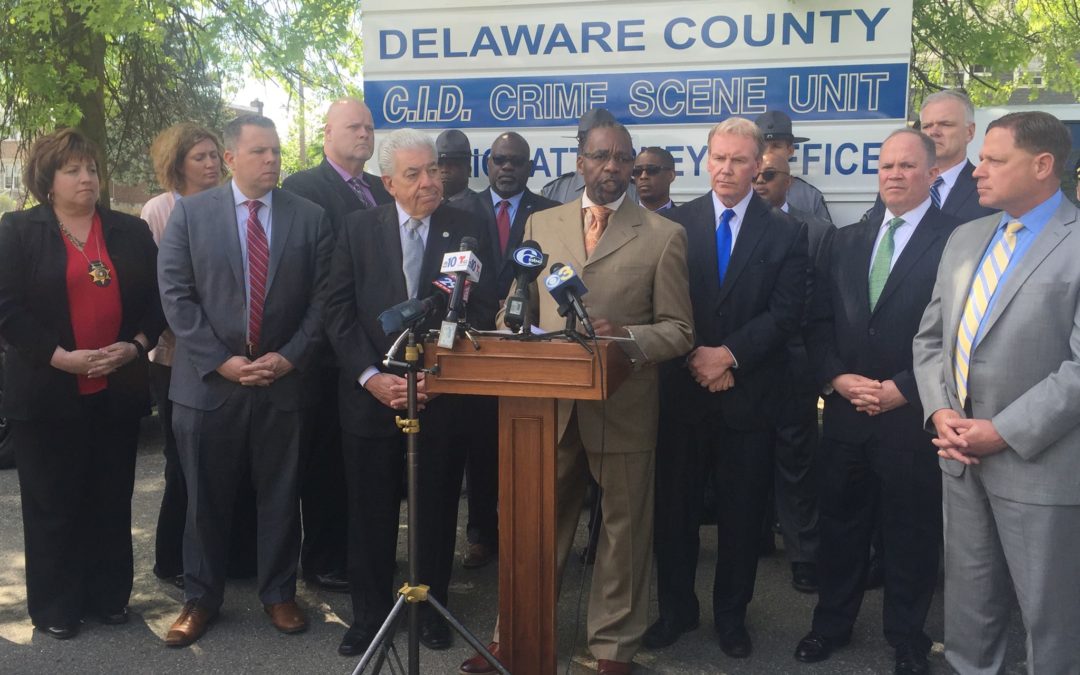 Today District Attorney Jack Whelan was joined by Delaware County Council and Mayor Thaddeus Kirkland to announce plans to launch a collaborative operation to address gun violence in the city. The press conference was held at Grace Church of God in Christ, located at 2106 Edgmont Avenue in Chester, located just blocks away from one of most recent shootings in the city.

As part of the comprehensive plan, Delaware County Council and the District Attorney have committed $100,000 in funding, with the use of no tax-payer dollars, to fund the Pennsylvania State Police to patrol the city and augment the efforts of the Chester Police Department. Authorities believe the surge of law enforcement agencies in the streets of Chester will be a force multiplier to local police in their efforts to quell violence, protect residents and apprehend criminals.

“Delaware County Council has partnered with our District Attorney on many public safety initiatives and is committed to supporting law enforcement in their efforts to protect and serve our residents,” said Councilman Dave White. “In fear of the gun fire that is ringing out in the city, residents are forced to sleep in their basements or away from windows in order to feel safe,” said White. “It is completely unacceptable for any of our residents to live in fear,” he said. “The vast majority of Chester residents are hard-working, law abiding individuals who deserve to feel safe in their own homes,” said White.

Additionally, the District Attorney announced a $2,500 reward for any information leading to the arrest and conviction of anyone possessing illegal guns. Police are working with local businesses, the faith-based community and Police Chaplains to share this information in an effort to crack-down on illegal guns and straw purchases. Individuals can report crime by calling 9-1-1 for emergency response, or the Delaware County District Attorney’s Gun Task Force at 610-891-4197.

District Attorney Jack Whelan is committed to the continued investigation and prosecution of the sale and transfer of illegal weapons, with the enforcement of minimum mandatory sentences for arrests, with the goal to discourage people from purchasing firearms and placing them in the hands of dangerous criminals. Since 2014, Delaware County District Attorney’s Office has prosecuted and convicted five individuals for the straw purchase of guns under the Brad Fox Law which went into effect in January 2013. On April 12, he announced the arrest of Vikki Towns-Perez of Chester, for the straw purchase of (9) nine firearms which she sold illegally on the street for money. Towns-Perez is the sixth individual to be arrested by authorities in Delaware County for the straw purchase of guns.

“We are working together with our partners in law enforcement to address the recent rash of violence with assistance from County Council who have provided funding for the PA State Police amplify patrols in Chester,” said District Attorney Jack Whelan. “In response to rising violent and drug-related crime, law enforcement will be targeting specific high-crime problem areas with a crackdown across the city on illegal guns and straw purchases,” he said.

“It is imperative that we implement a sustainable strategy to address violence in Chester,” said Mayor Thaddeus Kirkland.  “After months of conversation and strategic planning, I am pleased that partnerships with the District Attorney’s Office, the state police and other county, state and federal officials have been established to combat crime in our community.  I believe when law enforcement officials join forces, it sends a message to criminals that violence will not be tolerated,” he said.

In addition to bolstering patrols in the city, authorities held an early morning warrant sweep today to apprehend wanted individuals with outstanding arrest warrants and probation violations. In partnership the Delaware County Sheriff’s Office and Probation and Parole, authorities will continue to conduct city-wide warrant sweeps of dangerous offenders throughout the summer months, with assistance from state and federal officers, with the Chester Narcotics Task Force and the District Attorney’s Narcotics Task Force targeting open air drug markets and street corner dealers.