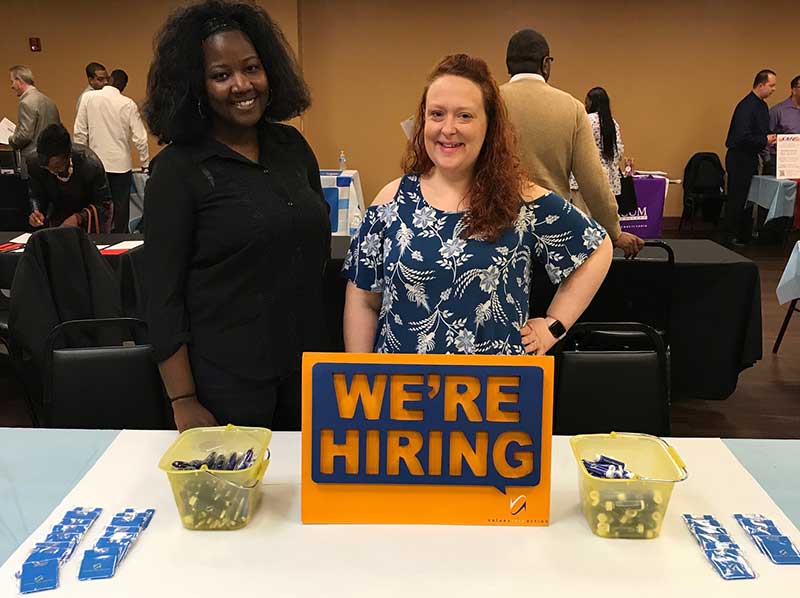 Picture Caption:   Representatives from “Values Into Action” participated in a Job Fair at Chester City Hall on Friday, April 13.

(CHESTER, PA) – More than 130 residents attended a Job Fair hosted by the Office of Workforce Development at Chester City Hall on Friday, April 13.

Beginning at 10am, residents walked into City Hall’s Community Room to find prospective employers situated behind information tables along the perimeter of the room. 25 local businesses participated in the job fair. Representatives from the City of Chester’s Human Resource Department and the Chester Police Department were among the two dozen companies in attendance.

Speaking on behalf of local law enforcement, Chester Police Chief James Nolan stressed how important it was for local police departments to look for eligible candidates to hire from the communities they serve. “Social norms and geography are important for officers to understand when carrying out the duties of this job,” said Nolan. “Hiring a person who has an understanding of the climate and culture enhances the officer’s ability to serve.  It also helps to cultivate stronger police and community relations.”

Eric Bayne, the City of Chester’s Workforce Development Coordinator spent the majority of the event tending to the needs of attendees and vendor participants. “My office began organizing this event at the beginning of 2018. The initial date was scheduled for March but inclement weather forced us to reschedule,” said Bayne.  “This turnout indicates that the event has been an overwhelming success. Our goal is to promote employment opportunities.”

Under the direction of Bayne, the Office of Workforce Development has hosted several career/job fairs in the past three years. “If there is anything we can do to serve our constituents who are unemployed or under-employed, then we must do that. The more constituents from our city that secure employment translates into increased tax revenue for the City of Chester and better opportunities for those individuals moving forward.”

The next job fair is slated for September 2018.