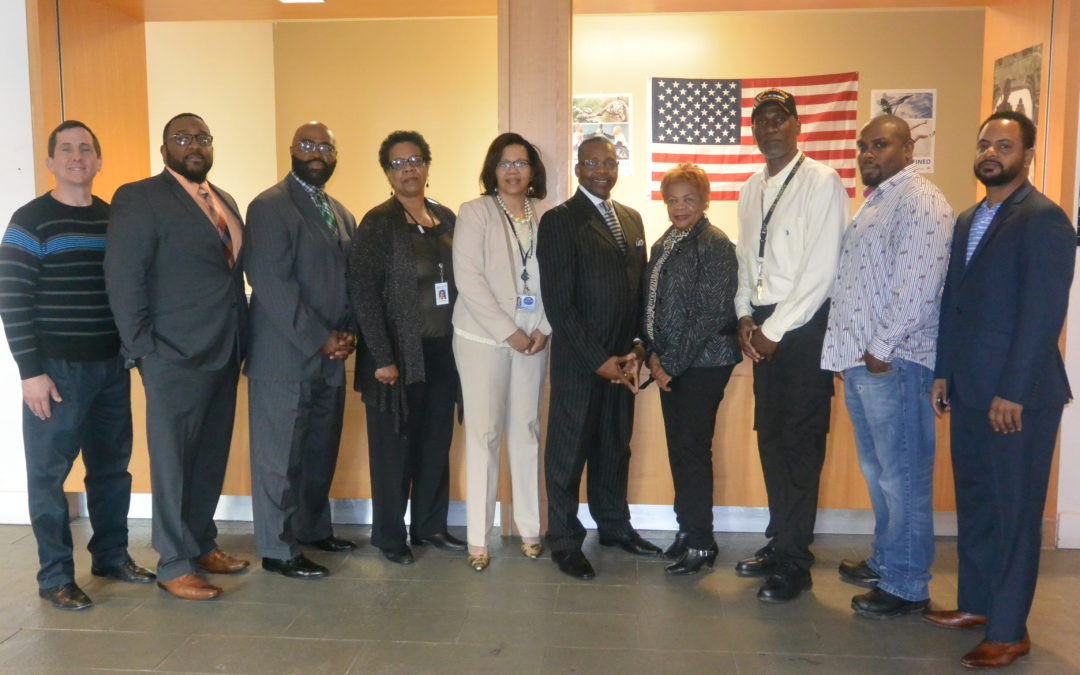 On Wednesday, March 29, 2017, the City of Chester held a small ceremony to celebrate the official opening of the Mayor’s Office of Reentry and Veterans Resource Services.

A key component of Mayor Thaddeus Kirkland’s 2016 Mayoral Transition Report’s public safety platform highlighted a goal to reestablish an Office of Reentry within the Mayor’s office. “This is a vital service for our community and to the persons needing these resources.  The city has a moral obligation to embrace its citizens, including those that were formerly incarcerated and especially those who have fought for our freedom,” stated Mayor Kirkland during opening remarks.  “We are excited about this office, the resource services and our volunteers.”

Volunteers for the Office of Reentry and Veterans Resource Services will consist of senior citizens, EDSI Reentry Program employees and community volunteers.  A majority of the community volunteers will be persons who have experience or a vested interest in reentry efforts or veterans services. “A lot of veterans do not know what benefits are available and owed to them,” said Shakur Abdul-Ali. Abdul-Ali, an army veteran and community activist signed up to volunteer at the Veterans Resource Services. He praised Mayor Kirkland’s administration for making these resources available, saying in part, “this is a real good move for the City of Chester.”

Another volunteer, Jamiel Cottman also reflected on what this could mean for the community. “From experience, I remember not having or knowing about the resources available concerning reentry,” added Cottman.  “I wish an office like this was available when I needed assistance. This will make things a little easier for people returning from incarceration.”

The Pennsylvania Commission on Crime and Delinquency (PCCD) provided $10,000 in funding to the City of Chester to create a strategic reentry plan.  The Mayor’s Office of Reentry Committee lead by Lisa Dennis, Director of the Office of Community Liaisons recently finalized that reentry plan. The plan will serve as a roadmap for the community to use and guide them to resources they need.

Charla Plaines, Reentry Coordinator for PCCD highlighted the state’s support in creating a sustainable Reentry Office in the community.  “This plan will identify current programs and help, through data, to determine what other services are needed or in need of expansion,” said Plaines.  Plaines has been working with the City of Chester for 17 years.   As the Reentry Coordinator for the state she has had the opportunity to travel and establish sustainable reentry programs all throughout the Commonwealth. “I applaud the city for officially opening the office. This will enable them (Chester) to apply for funding and grants to sustain these programs.  It will help grassroots organizations.  It also reflects to the community that Mayor and Council are on board with building to make it better,” Plaines added.

Both the Office of Reentry and the Veterans Resource Services will be open Monday – Friday for four to six hours.

Mayor’s Office of Reentry Mission Statement:  We wish to enhance collaboration among reentry service providers and encourage broad-based community support and involvement for the prisoner reentry in the city of Chester, PA.

To contact the Mayor’s Office of Reentry or Veterans Resource Services, please call (610)447-7700.