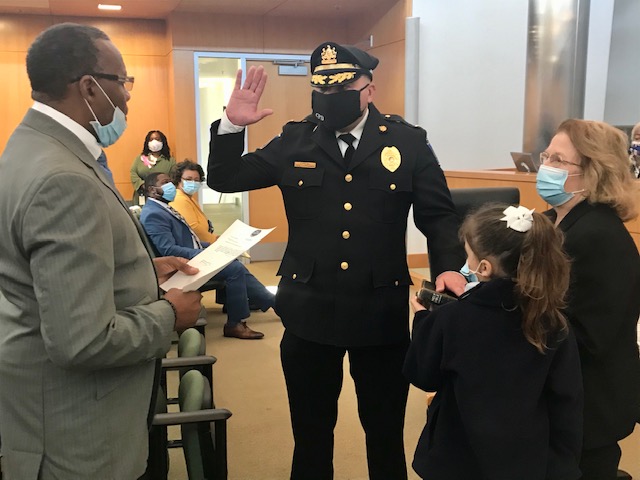 PICTURE CAPTION: Mayor Thaddeus Kirkland (far left), administers the oath of office to Steven Gretsky (middle), while his mother Monica (top right)  and daughter Olivia (bottom right) hold a bible. Gretsky was sworn-in to the position of Commissioner during the city of Chester’s Council Meeting on October 14.

Prior to administering the oath of office during the City’s regularly scheduled Council Meeting, Mayor Kirkland who oversees the Chester Police Department, spoke at length about his respect for Gretsky and his decision to appoint him to the top cop position. “Back in 2016, when I first took office and promoted him to Police Major, I knew there was something special in him,” said Mayor Kirkland. “I saw an officer and a gentleman, as well as a professional. I know that he will continue to move in excellence and help to foster the right morale within the department.”

Joined by his mother Monica and daughter Olivia, Gretsky took a moment to address the audience, thanking his family, council and fellow law enforcement colleagues, while also highlighting his desire to strengthen community and police relations. “ My main goal with leading this department is to bridge this gap with the community,” said Gretsky. “There are new ideas that we will roll out and implement to get this done.”

Gretsky, who is known in the community as an officer of the people, also received an award during the Council Meeting. Chester resident Darren Laws, who presented him with the trophy on behalf of the ChesterMission Foundation and the community, highlighted Gretsky’s commitment to the City. “ He goes above and beyond,” stated Laws. “ Even if I call him and tell him that we have to do something, he’s right there.”

Gretsky, a Chester native and 17-year-police veteran began his service as a police officer in February 2003 when he started working for the Chester Police Department.  He first served as an officer within the patrol division for 12 years before rising in ranks to the position of Patrol Sergeant in March 2015. In January of 2020, he was appointed as the Deputy Commissioner after serving as the Police Major of the patrol division for four years.

Many of the community policing events that have taken place in Chester in recent years have been spearheaded by him, including several back-to-school and coat drives. In 2017, Gretsky surprised a high school senior by offering to cover his prom expenses.  This same year he received the Outreach Heroes Award.

To date, Gretsky has received several certificates/awards for his service as a law enforcement official. Those awards include: