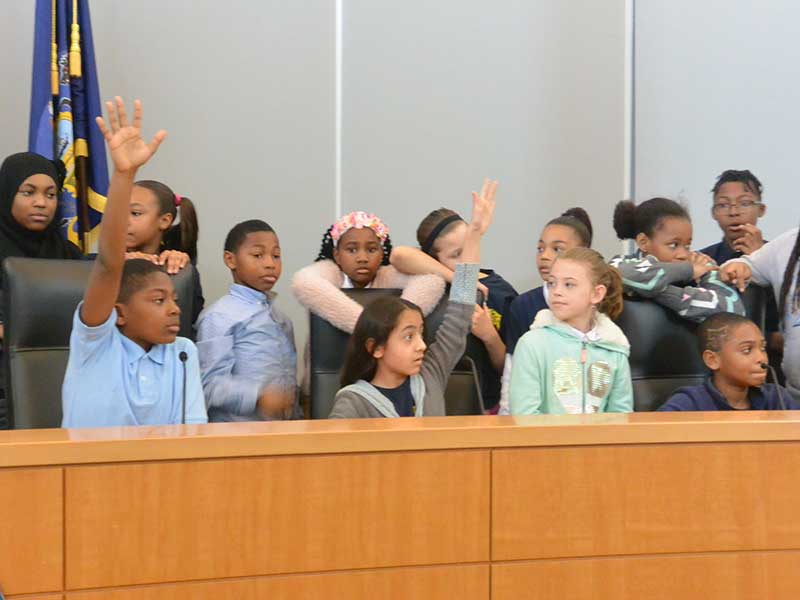 Students from both schools faced-off in a jeopardy-style competition that highlighted facts surrounding African American history, City of Chester history and local politics. For nearly an hour, the students were quizzed inside of Council Chambers on a myriad of topics in front of their peers, school advisors and family members. Meta Parker, a Chester resident and mother of Madicyn Parker, a fourth-grade student at Main Street Elementary School, reflected on what she hoped her daughter took away from the game. “It was very educational for them. I tried to help her (Madicyn Parker) understand that she is learning about boys and girls, some who were her age,” said Parker. “I am impressed with how well all of the students did. It taught me some things that I didn’t know myself.”

This is the fourth consecutive year, the City of Chester’s Department of Parks and Recreation hosted the Heritage Bowl at Chester City Hall. Under the direction of Councilwoman Elizabeth Williams, the event was created as a medium to encourage healthy competition for local grade school children during Black History Month. “This is an educational moment and one that we have been able to perpetuate for a few years,” said Councilwoman Williams. “We have to remind our young people who they are and where they come from.”

To prepare for the competition, the students were given a study guide one month prior to game day. “Both teams did a great job,” said Nancy Murray, a sixth-grade teacher at Stetser Elementary School. “These kids gave up their lunchtime to study this packet. It was evident leading up to this day that the kids were invested and wanted to win.” The study guide, a 50-page pamphlet consisted of facts that included key dates, inventions and notable figures.

After the competition, all of the students were treated to pizza and juice by the Chester Community Charter School’s Parent Teacher Association.

The new victors will now have the honor of keeping the Heritage Bowl trophy at their school for one year. Student participants from both schools will also be gifted with Philadelphia Phillies tickets.