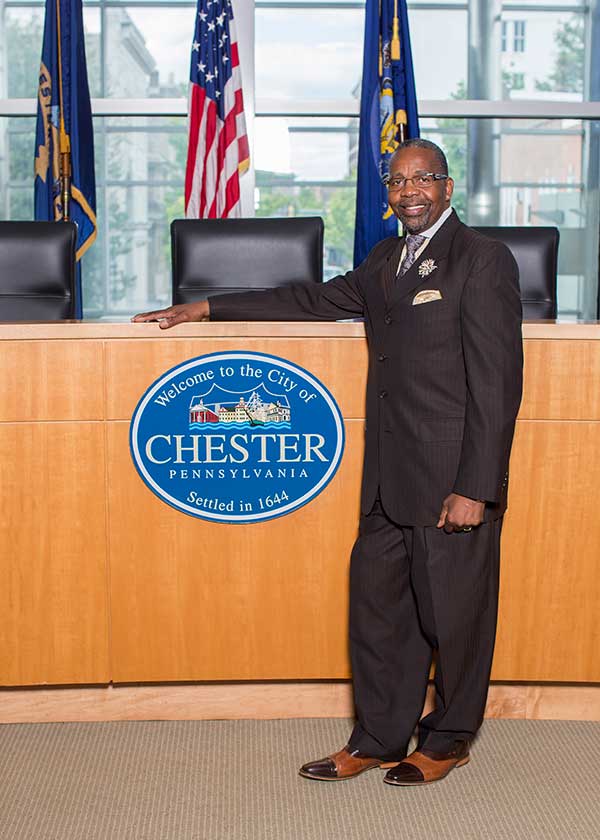 Honorable Mayor Thaddeus Kirkland is a remarkable community activist who first burst into the public arena in the fight for improved education for the students in the City of Chester. In spite of adversaries, Kirkland continues the fight for educational fairness and equality within the Chester-Upland School District — a fight that he is committed to winning. He is not only a well-loved and vocal leader in his home city, but he is also respected and admired across Delaware County.

Elected in his first attempt for public office in 1992, Kirkland was charged with the task of representing the 159th Legislative District, which includes the communities of the City of Chester, Chester Township, Lower Chichester Township, portions of Ridley and Upper Chichester townships, Eddystone, Marcus Hook, Trainer, Upland and Parkside.

Kirkland is the pastor of Community Baptist Church. Prior to his election to the General Assembly, Kirkland was a community service coordinator at Crozer Chester Medical Center, where he conducted outreach and educational programs for teenagers.

Kirkland has been a strong advocate for the elderly and has fought to ensure equal rights for both the visually impaired and the physically challenged. He is the prime sponsor of legislation relating to prayer in schools, Braille, video surveillance, absentee ballot, technical training and Head Start.

A 1973 graduate of Chester High School, Kirkland holds a Bachelor of Arts degree in Communications from Cheyney University. He also attended classes at Eastern Baptist Theological Seminary. He has been supported in his endeavors by his family, which includes his wife Susie and their five daughters.

Kirkland, who has been described as tireless, concerned and action-oriented, is involved in numerous community organizations and activities. He currently serves as Democratic chairman of the House Tourism and Recreational Development Committee. Within the House of Representatives, he is a member of the Pennsylvania Legislative Black Caucus and the Democratic Policy Committee. Additionally, Kirkland is Vice President of West End Ministerial Fellowship of Chester and Vicinity, former Vice-Chairman of the National Black Caucus of State Legislatures, a former Board of Trustee member of Lincoln University and a graduate of the Widener University Leadership Academy. He is also a member of Wine Psi Fraternity, Incorporated and Omega Psi Phi Fraternity, Incorporated.