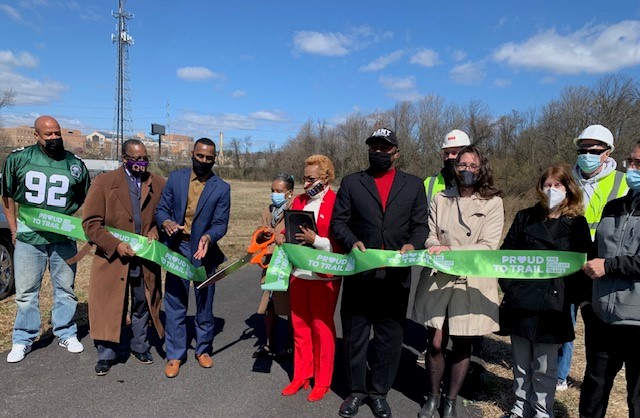 PICTURE CAPTION: The city of Chester celebrates the completion of Eyre Park Levee Walk during a ribbon-cutting ceremony on Monday.

The completion of Eyre Park Levee Walk adds to the Chester Creek Trail and helps to create continuity within the Circuit Trails network.

(CHESTER, PA) – The city of Chester today hosted a ribbon-cutting ceremony to celebrate the completion of Eyre Park Levee Walk. 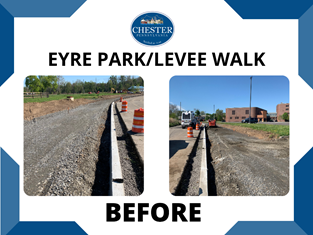 During the ribbon-cutting ceremony, Mayor Thaddeus Kirkland talked about what the trail project means for the community. “I am amazed at the transformation of this area,” said Mayor Kirkland. “Seeing what was constructed here provides me with even more hope for the direction that this city is headed.  Revitalization. Growth. Real community, where people are thriving. No longer are the days where we will have to venture to other places to experience what the creation of the trail represents.  We are building a better Chester.”

The project, which costs approximately $442,782 to complete, was funded by the Community Development Block Grant Program from the U.S. Department of Housing and Urban Development; the Coastal Resources Management Program by way of the National Oceanic and Atmospheric Administration through the Pennsylvania Department of Environmental Protection; and the Delaware Valley Regional Planning Commission through a grant from the William Penn Foundation.

Lizzie Hessek, Program Manager for the Pennsylvania Environmental Council spoke on behalf of the Circuit Trails and highlighted the significance of the new trail to the network. “The Circuit Trails is a network of over 800 miles of trails currently in development across the region, and Chester is an important node,” said Hessek. “The Levee Trail is part of the Chester Creek Trail – a major recreational corridor in Delaware County that will safely connect residents to the East Coast Greenway along the Delaware River. The Circuit Trails Coalition is committed to creating equitable, inclusive public spaces that work to dismantle systemic environmental injustices. We are privileged to work with the residents, staff, and elected officials of Chester to provide more opportunities for people in the city to spend time in nature”

Councilwoman Elizabeth Williams, Director of Parks Reaction, and Public Property read a resolution at the ceremony. The resolution, which was signed by Mayor and Council in 2019 in anticipation of Eyre Park Levee Walk’s completion, designates Crozer Park to Eyre Park within the Chester Creek Trail as the Martin Luther King Jr. Heritage Trail, as part of the Chester City Parks, Trails, and Open Space Master Plan. 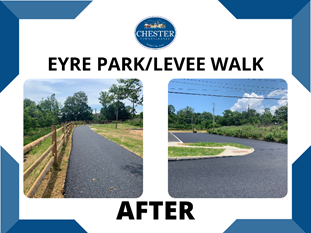 Official signage for MLK Jr. Heritage Trail will be added to Eyre Park Levee Walk in the future.

The completion of Eyre Park Levee Walk was a multi-phase project. In September 2020, the Stormwater Authority of Chester completed Phase 1 of the project known as The Eyre Park Greenway Stormwater Infrastructure Project. More information about their project is below.

The Eyre Park Greenway project demonstrates water quality improvements, community benefit, and the scalability of green stormwater infrastructure in the city of Chester. The installed green infrastructure includes 110 yards of vegetated bioswales that run along both sides of the new walking path that replaced the previous impervious cover. The existing roadways have been narrowed, repaved, and converted to an approximately, one-third mile long walking path around the park.  Stormwater runoff from current Eyre Drive will pass through vegetated swales with new underground piping installed to distribute water and reduce pollutants to the nearby Chester Creek.

ABOUT THE CIRCUIT TRAILS (Greater Philadelphia)

A vast regional network of hundreds of miles of multi-use trails that is growing in size each year. The Circuit connects our local communities, providing endless opportunities for recreating and commuting.