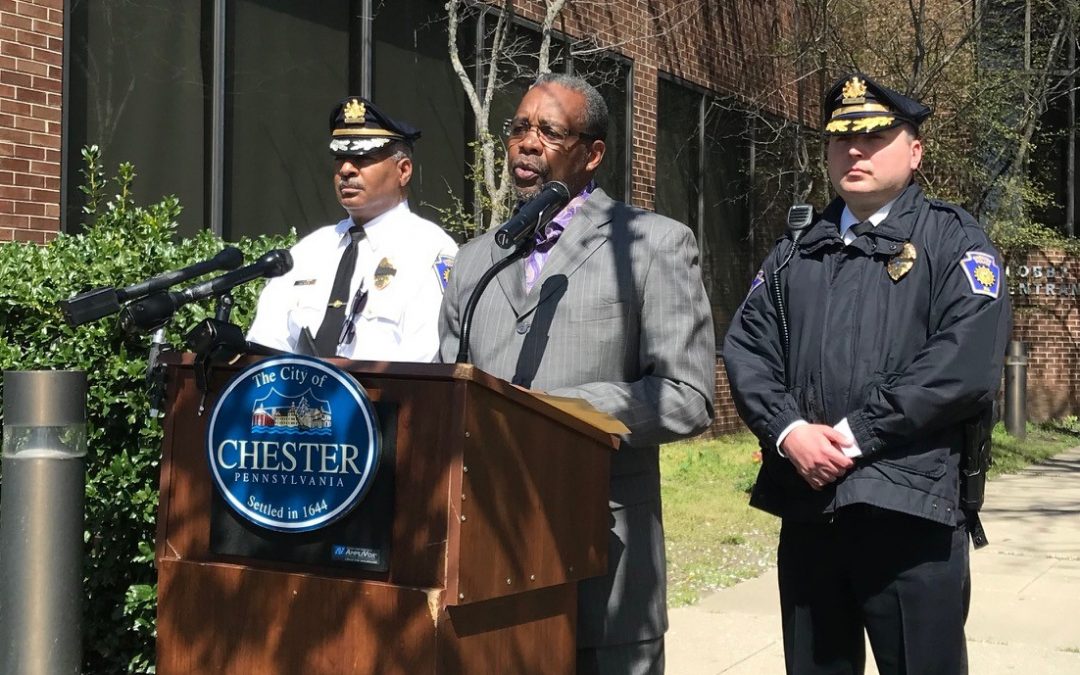 PICTURE CAPTION: Mayor Kirkland addresses the media during a press conference on Monday afternoon in wake of shooting that claimed the life of 7-year-old Sinsir Parker over the weekend.

During a press conference on Monday, April 6, Mayor Thaddeus Kirkland called on federal, state and county officials to help the city form a Gun Taskforce after the latest shooting incident in the city claimed the life of a child.

(CHESTER, PA) – Mayor Thaddeus Kirkland today announced his intention for the city of Chester to raise a $50K reward for information that leads to the arrest and conviction of the suspects(s) responsible for the shooting death of a seven-year-old child.

Sinsir Parker, a seven-year-old male child was fatally injured in a shooting incident that took place around 9:00pm on Sunday, April 5 near the 2600 block of Swartz Street in the city’s Highland Gardens neighborhood.  Police reports indicate the male child was shot in the face and pronounced dead on the scene by Paramedics from Crozer-Chester Medical Center.

Speaking at an early afternoon press conference, Mayor Kirkland denounced the violence in the city, while also asking the city’s corporate partners for help. “Unfortunately, we are fighting two fronts in our community,” said Mayor Kirkland. “This city, like the rest of the world is dealing with the pandemic of the Coronavirus but we are also facing the epidemic of gun violence.”

I am calling on some of our major corporate partners to help with our reward fund,” stated Mayor Kirkland. “A few weeks ago at the city’s evening Council Meeting, a resident suggested that we increase our reward amount. Now we will see. The goal is $50,000. I have spent most of the morning reaching out to our partners. I have already received a pledge of $10,000 from Mr. Vahan Gureghian and his wife of the Chester Community Charter School.”

In addition to raising the reward fund amount, the city of Chester will move forward with more aggressive efforts to stop violence in the city, while following the current orders to help mitigate the spread of the Coronavirus (COVID-19):

·         All basketball courts will be closed. City officials have directed employees from the Parks department to begin removing basketball rims.

·         Increasing traffic stops in the city.  Vehicles with more than two (2) occupants will be subject to random stops/checks by the Chester Police Department.

·         Ride-along-Campaign. Once the stay-at-home orders and social distancing recommendations have been lifted, city officials will be calling on Governor Tom Wolf, Delaware County Councilmembers, Congresswoman Mary Gay-Scanlon and the Attorney General’s Office to participate in “ride alongs” with Chester Police officials.

“I want our federal, state and county officials to ride along with our police officers,” said Mayor Kirkland. “This will afford all of them and their offices the opportunity to see and experience what our police have to deal with each and every day with limited resources.”

“Each time we raise the questions for it, there’s no real answer. We need a Gun Taskforce,” said Mayor Kirkland. “It is easier for our young people to get guns in their hands than it is for them to get computers. Something is wrong with that.”

During the press conference, Police Commissioner Otis Blair emphasized the department’s goal to bring the suspect to justice. “As a father, I’m honestly disgusted,” said Commissioner Blair. “I want the person, the idiot who is responsible for this to know we are going to find you. You will feel the full extent of the law.”  The Commissioner also made a plea to the public for assistance. “I’m begging anybody with any information, any tips, to please come forward and share that information with us. No tip is too small. That information you are hesitant to share may be what we need to break this case.”

The Chester Police Department was able to recover the vehicle that was involved in the shooting incident on April 5. The vehicle is currently being processed for evidence.

Any person that has information about this case should contact:

The city of Chester established its Reward Fund in 2016.  Prior to today’s charge to raise monies to increase the reward fund amount, the reward was set at $15K.

Residents are encouraged to download the Chester Police Department mobile app onto their smartphone or tablet.  It is available free of charge from the Apple and Google Play (Android) app stores.