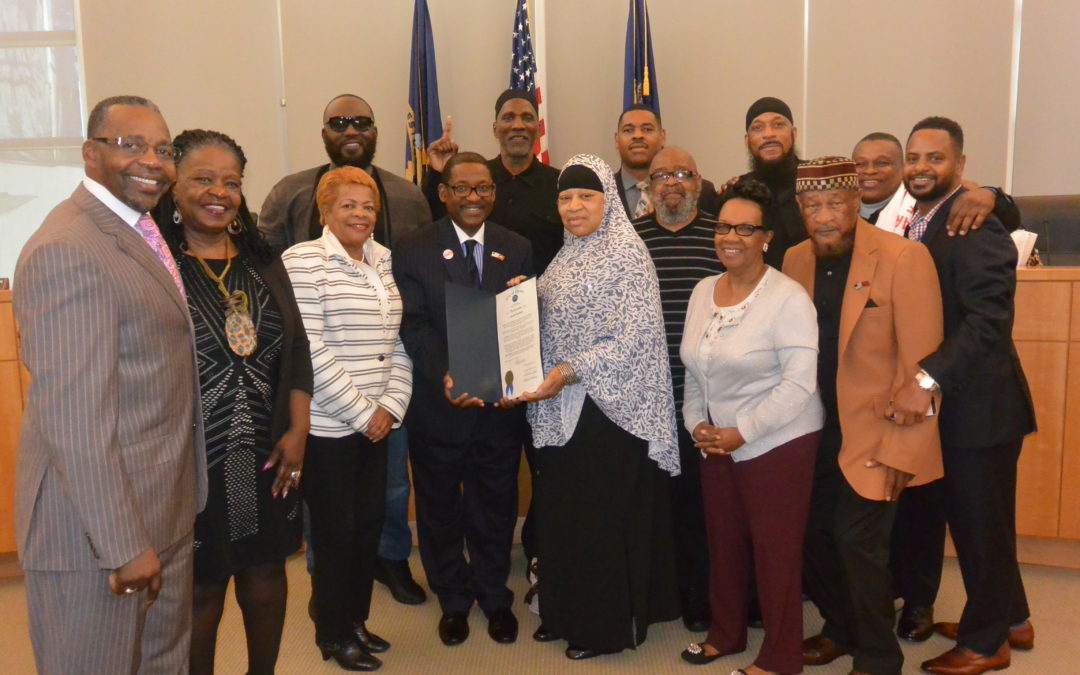 Picture Caption: Mayor Thaddeus Kirkland and other city officials pose with Muslim leaders from the community after reading a proclamation to declare the City of Chester’s intent to annually recognize Islamic holidays.

The proclamation, which reads in part, “The City of Chester has a diverse religious community and wishes to be as inclusive as possible to encourage religious freedoms,” was presented to Brother Shakor Abdul-Ali and other Muslim leaders during the city’s regularly scheduled Council Meeting.

Abdul-Ali, along with several members of the Muslim community in Chester have been advocating for the city and the Chester-Upland School District to recognize Islamic holidays for years. “The Muslim leaders have been dogmatic in trying to get this done,” said Mayor Kirkland.  “We wanted to make sure when we presented this proclamation, we did it right.”

After accepting the proclamation, Abdul-Ali and Imam Haneef Mahdi spoke briefly about what the declaration of recognition would mean for the community. “This is a historic event for the City of Chester and the Muslim community. We felt marginalized to an extent,” said Abdul-Ali. We are happy that mayor and council have afforded us that opportunity within the City of Chester.”  Imam Mahdi, who began his remarks by highlighting his conversion to Islam at the age of 17, echoed Abdul-Ali’s praise of Mayor Kirkland’s administration. “As long as we continue to have the great leadership that we have in the council, we will get to the goal we are trying to reach as a city.”

The Chester-Upland School District and Muslim leaders are in the process of finalizing an agreement that would reflect the Islamic holidays on the school’s annual calendar.

Celebrated after the month-long observance of Ramadan