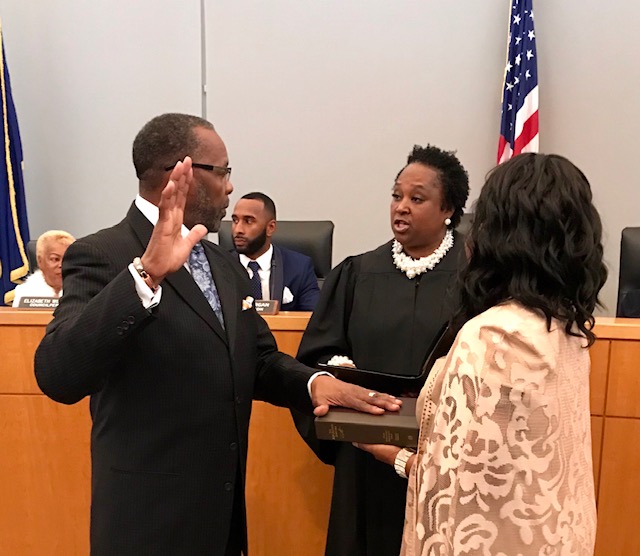 Mayor Thaddeus Kirkland and several other city officials, including law enforcement personnel were sworn in to office during a ceremony on Monday morning.

(CHESTER, PA) – On Monday, January 6 the city of Chester sworn-in several city officials during a ceremony that took place at 10am inside of Council Chamber located at Chester City Hall.

Mayor Thaddeus Kirkland was sworn in to his second-term as mayor.  Kirkland, a seasoned politician previously served as State Representative for the 159th Legislative District from 1993-2016. During his first term as mayor, Kirkland was responsible for overseeing the Public Affairs Department, which encompasses the Police Department, the Office of Community Liaisons, the Workforce Development Office, the Office of Re-Entry and Veterans Affairs and the Planning Department. “I am always humbled during events like this,” said Mayor Kirkland. “For nearly 30 years I have committed myself to being a public servant. This community has trusted me to lead and serve.  Do we have problems? Yes, but those problems are no different than any other city.  However, I have been and will continue to work diligently to move this city to higher heights. We have made progress and will continue to move in a direction that is positive for our residents and our community as a whole.”

Incumbent Councilwoman Elizabeth Williams was sworn in to her third-term as councilperson. Williams, who serves as the Director of the city’s Parks, Recreation and Public Property Department has been a councilperson for the city since 2012. “Everything I do, I do for our city,” stated Councilwoman Williams. “I work for the people and I enjoy every minute of it.”

Councilman William Morgan was sworn in to his first four-year term as councilperson.  In 2016, Morgan was appointed to the position of councilmember after former Councilmember Nafis Nichols resigned.  In 2017, Morgan successfully ran and was elected to finish out the remainder of Nichols’ term.  Since becoming a councilmember, Morgan, who also dually serves as the Director of Finance has helped to balance the city’s budget for three consecutive years.  “When I was first appointed to this position, I expected a magic book to appear on my desk that would help to guide me and make things right,” said Councilman Morgan. “While time didn’t reveal a magic book, I have learned a lot in this position that will allow me to help steer this ship in the direction of success. I am honored to be here and will continue to serve the city of Chester to the best of my ability.”

During today’s ceremony, Morgan was also re-appointed to the position of Deputy Mayor—a position he has held since 2018.

City Controller Edith Blackwell was sworn in to her third term as controller. “I love my city, and being able to serve the community I come from,” said Controller Blackwell. “For the next four years, I promise to continue doing the work and putting forth my best effort in my department.”

New appointments and promotions within the police department were also announced. 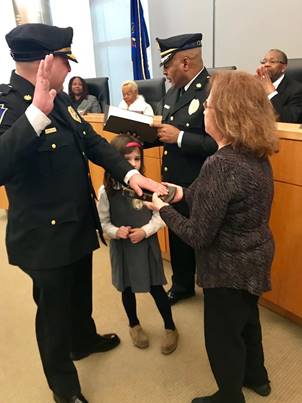 Steven Gretsky, who previously held the rank of Police Major, was appointed to the position of Deputy Police Commissioner.  Gretsky, a lifelong Chester resident and 17-year police veteran has been with the Chester Police Department his entire law enforcement career.

Sergeant Katrina Blackwell was appointed to the position of Police Major.  Blackwell, who was born and raised in Chester has been a member of the Chester Police Department for 16 years.

Sergeant Mathew Goldschmidt, a 13-year police veteran with the Chester Police Department was promoted to the position of Police Captain.  Prior to working for the city of Chester, Goldschmidt served as a law enforcement officer for the Borough of Millbourne, PA.

All city of Chester councilpersons, including the mayor, dually serve as a councilmember and a director of one of the five (5) departments that make up Chester City government. 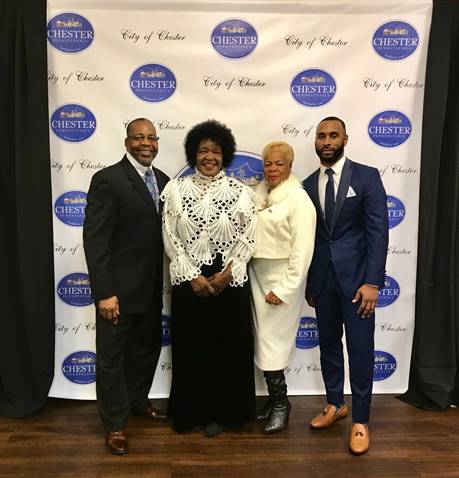