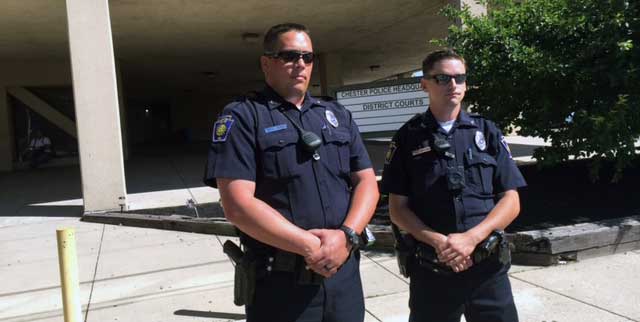 “I am excited we are able to bring this body-camera initiative to the City of Chester because it speaks directly to our desire to be transparent during my administration with our residents,” said Kirkland. “It is another progressive step in our effort to better serve and protect the residents through strengthening community/police relations.”

Public Safety has been a top priority for Mayor Kirkland. The 2016 Mayoral Transition Report’s public safety platform, which was chaired by Police Commissioner Darren Alston, referenced implementing the usage of body-worn cameras. “We want to, as a department, work on obtaining resources to better assist us in performing our duties to serve the residents,” said Alston.  “Police departments across the country are rolling out similar pilot programs. We want to be aggressive in protecting ourselves and our residents. This program, if fully adopted will allow all parties to be accountable for their actions.”

A group of 10 patrol officers have volunteered to wear the body-worn cameras during a trial period, which is scheduled to last through the end of 2016. The field-testing phase will allow for these officers to properly assess the effectiveness of each vendor’s equipment. Officer participation in the pilot program was granted upon completion of training sessions on the usage of the vendor’s equipment.

Currently, the Chester Police Department has secured an agreement with Taser International Inc., to use their Axon Body Cameras and digital evidence management, data storage system for a 90-day trial period. Policeand city officials will continue to meet with other vendors during this time to evaluate their equipment and performance within other police departments, before confirming their participation in this pilot program. Once other vendors are confirmed for participation in the pilot program, the volunteering officers will go through mandatory training sessions with each respective company.

Chief James Nolan, who has been an integral official in creating a policy for usage of the body-worn cameras, stressed the importance of implementing a “working document” during the field-testing phase. “During the process of researching these devices and meeting with other departments currently utilizing them, I think it is imperative to have a policy in place prior to full deployment,” said Nolan. “Although this is a working document that is subject to change depending on our assessment of the equipment’s effectiveness, it has been accepted by the city’s solicitor, Ken Schuster and a copy has been sent to the Delaware County District Attorney’s Office. We have to ensure that we are operating in compliance with the law.”

Full implementation and deployment will be contingent on the assessment of the vendors’ equipment culminating the field-testing stage. The approximate cost to outfit the entire department with body-worn cameras is between $70,000 – $100,000. City officials will work to secure funding for these devices through solicitation to private donors and sponsors. Currently, the city has received a $10,000 donation from Vahan Gureghian, founder and CEO of CSMI, specifically designated for the body-camera initiative. The final assessment will be provided to narrow down a more accurate cost of the equipment

This will also aide in helping city officials to filter through state and federal funding that best supports Chester’s ability and desire to equip the entire department with body-worn camera devices.