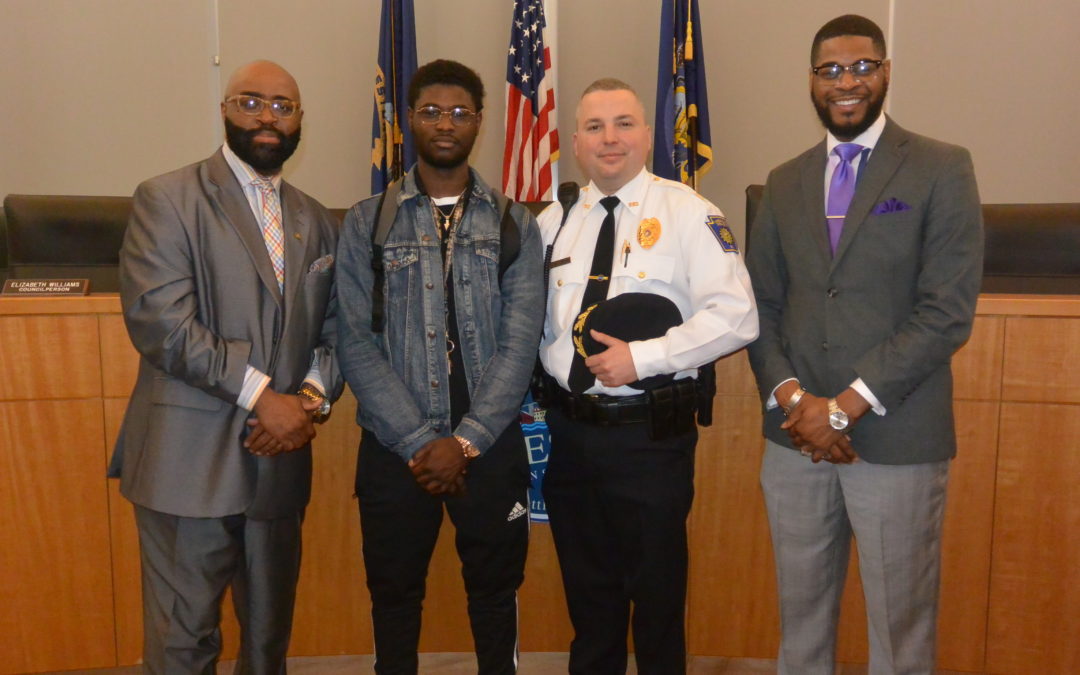 (CHESTER, PA) – Today, during the City of Chester’s City Council Meeting, Chester police Major Steven Gretsky surprised a12th grade Chester High School student when he announced that he would cover all of the senior’s prom-related expenses.

Major Gretsky, a 15-year police veteran presented 17-year-old George Bradley with $200 cash to cover the cost of two prom tickets, a $175 gift certificate to Iacobucci’s Formal Wear and a pair of size 11 Air Jordan 9 Retro sneakers. Major Gretsky also promised that the senior would have transportation to and from the prom.

“I feel really blessed,” said Bradley.  “Last week I had decided I wasn’t going to attend prom for different reasons so this really helps out.”

Major Gretsky and Bradley began communicating after Community Liaison Fred Green hosted “Conversations With Cops” on March 21 at Chester High School. “After we went to the High to speak to the students, I extended an invitation to every one them,” said Major Gretsky.  “George reached out to get a tour of the Police Department and we’ve been communicating since that day.”

Bradley, who currently serves as the Jr. City Controller as apart of the Chester Youth Leadership Commission (CYLC), spoke about how his interaction with Major Gretsky was creating interest among other students to do the same with law enforcement. “I came home one day from hanging out with him and some friends asked me what I was doing,” stated Bradley. “I showed them pictures and said it was fun.  They mentioned being open to coming to the Police Department for a tour in the future.”  Bradley finished by saying that he believed his friends would benefit in their futures and look at police officers differently, if they took a chance to work on building a relationship with them.

As the City of Chester works to strengthen community and police relations, Police Commissioner Otis Blair hopes Major Gretsky’s gesture will help to change some negative images surrounding the department. “I think the community will see this and think, believe it or not, the officers are paying attention,” said Commissioner Blair. “There are individuals within the Police Department that care. If we can assist in anyway, there are officers who are willing to do so.”

Chester Youth Leadership Commission: The Chester Youth Leadership Commission (CYLC) is an organization established in the Office of Councilwoman Elizabeth Williams. The Commission is committed to developing the next generation of community leaders, public servants and future professionals in the City of Chester. The CYLC is a collaborative body represented by youth leaders from various citywide youth organizations and schools. Members of the Commission will be provided with vehicles to learn about government, participate in the political and legislative process through policy development. They will also have the opportunity to shape public policy by voicing the needs and concerns of youth in Chester. The Commission provides projects, workshops, job shadowing, training, events, trips and hands-on experience in leadership, team building, advocacy and youth empowerment. These tools will help to empower the CYLC members as they make a unique impact on their communities.

Conversations With Cops:  An open forum that brings Chester Police Officers to local schools with the hope of encouraging healthy dialogue between law enforcement and the youth demographics in the City of Chester.  Junior Councilmembers and other Junior Officials, under the direction of the Mayor’s Office of Community Liaisons came up with the idea for “Conversations With Cops” after expressing concerns about police and youth relations in the community.  The open forum focuses on highlighting concerns or issues that law enforcement or youth may have that prevents the two groups from having a healthy relationship.  The objective of highlighting the concerns is to work towards solutions and strengthen relationships by cultivating and maintaining open lines of communication.