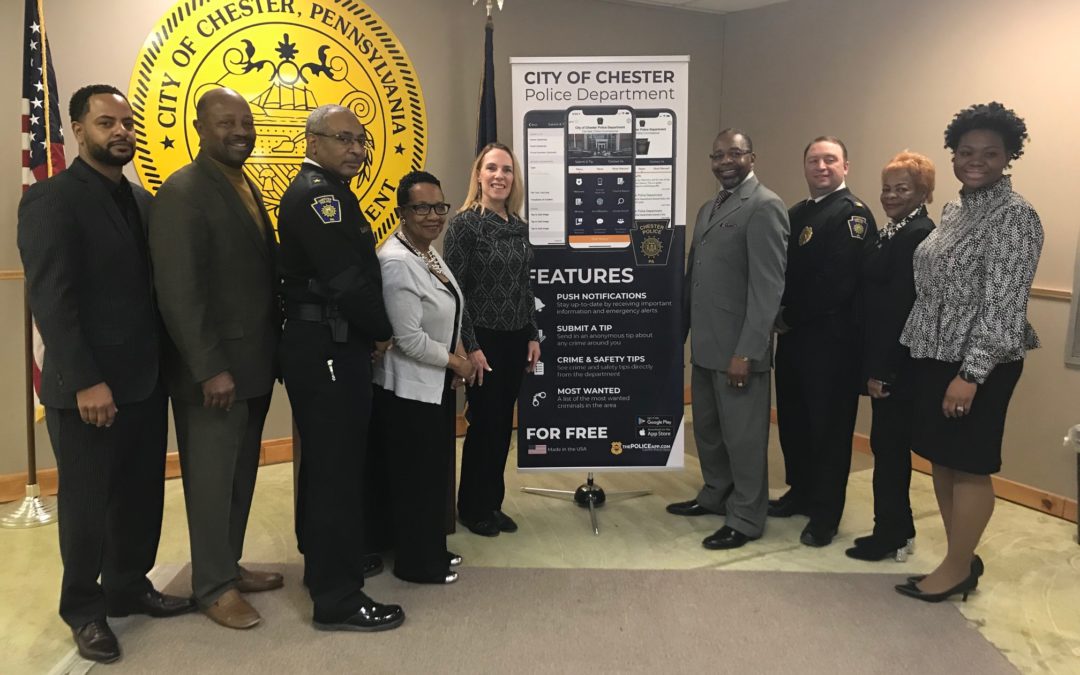 (CHESTER, PA) –)   Mayor Thaddeus Kirkland and the Chester Police Department command staff today announced that homicides in the city were down 38 percent in 2018.

Speaking during a late morning press conference at the Chester Police Department, both Mayor Kirkland and Police Commissioner Otis Blair referenced the crime statistics for the last two years. “Last year we ended the year with 18 recorded homicides. That is the lowest number since 2009,” said Mayor Kirkland.  “Let’s be clear—any life lost is one too many, however, we are making strides.”

The 2018 statistics also highlight a decrease in total crime in the city. “We are encouraged anytime we see a downward trend in crime,” said Commissioner Blair. “We still have a lot of work to do. The numbers don’t reveal everything but they definitely show progress and I am proud of this department.”

Statistics for 2017 and 2018 that were released include numbers related to: homicide, rape, robbery, assault, burglary, theft, vehicular theft and arson. All crimes with the exception of burglaries and vehicle thefts decreased. Rapes saw the biggest drop, with a 52 percent decrease in 2018 when compared to 2017.

Also announced during the press conference was the release of a new iPhone and Android mobile app as a service to the community.  The app is available for the public as a free download from the app stores.

A key feature is Submit a Tip, a form that enables you to submit a crime tip, anonymously or with your contact information, along with photos; your tip submission is confidential.

Included under the Main Menu are a welcome from Police Commissioner Blair, Crime and Safety Tips, Sex Offenders information, and an Inmate Search.  Community Resources is a guide to government, non-profit and religious organizations that offer social services, food programs, addiction treatment and preventions services, and behavioral health programs.  The Tickets and Reports feature connects to online services to pay parking tickets and obtain accident reports. Additional features allow the user to see traffic conditions, obtain police career information, and submit a compliment or concern to the police department.

To engage the greater community in public safety, anyone with the app can use the "Share our App" feature under Settings, as well as forward alerts to friends, family, and neighbors.

“We are excited about this new app,” said Mayor Kirkland. “It offers a lot. It benefits us all. I encourage the community to download it—see what the app has in store. Take the time to see what we have created to make things easier and better for the city.”

The Chester Police Department mobile app is created by ThePoliceApp.com, a division of OCV, LLC, which specializes in mobile app development for police departments, sheriff’s offices and public safety.  With more 500 apps in the app stores, including the Delaware County PA Sheriff’s Office mobile app, OCV designs and develops custom apps for state, county, and municipal government agencies.  “Nearly 80% of persons in the U.S. own and use smartphones as their main means of communication.  So mobile apps offer agencies a better way to alert, inform, and resource the public,” said Suzy Keenan, communications strategist with OCV.  “Mobile apps and social media are the trends for grassroots sharing of information today.”

Download the Chester Police Department mobile app onto your smartphone or tablet.  It is available free of charge from the Apple and Google Play (Android) app stores.