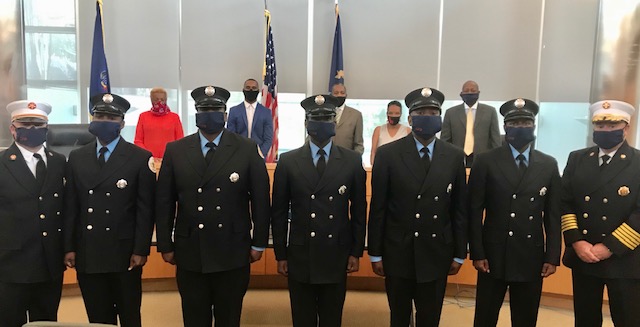 PICTURE CAPTION: Chester City Councilmembers pose for a picture with five new Fire Cadets who were sworn-in to the position of firefighter during the city of Chester’s Council Meeting on July 22.

(CHESTER, PA) – During the city of Chester’s regularly scheduled City Council Meeting on Wednesday, July 22, five men were sworn-in to the position of firefighter.

Prior to the group of men being sworn-in, Fire Commissioner William Rigby IV offered words of praise about the firefighters.  “I am extremely proud of all five of these men, who are also Chester 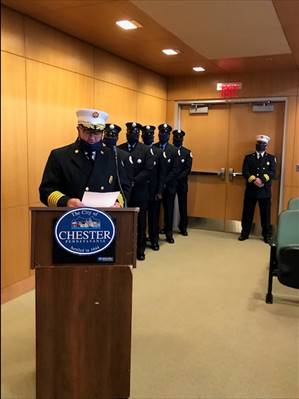 Councilman William “Al” Jacobs, who also serves as the Director of Public Safety spoke directly to the cadets about what it means to have them join the department that he oversees. “You all are embarking upon one of the greatest opportunities and jobs that the City has to offer,” said Councilman Jacobs. “There is great leadership within the Fire Department, and I hope every single one of you takes full advantage of what’s here because there are opportunities to build a career or even become Fire Commissioner, if you set your sights on it.”

Commissioner Rigby received numerous compliments about all five of the Chester Fire Cadets from the academy staff. It was remarked that the Philadelphia Fire Department wanted to “keep” the Chester Cadets. Cadet Emanuel Delva was awarded second place for the Physical Fitness Award and was chosen by the academy instructors to receive the Fellowship Award.

The five Chester Fire Cadets will begin a two-week orientation under the supervision of the Bureau’s Training Officer, Battalion Chief John-Paul Shirley. Upon completion of orientation, they will each be assigned to one of four platoons where they will join their fellow firefighters.