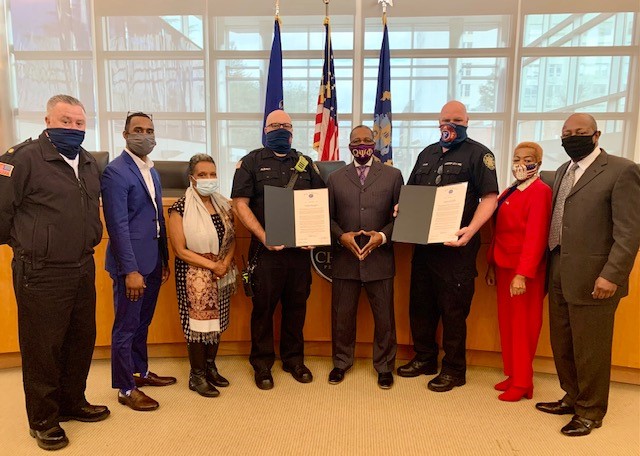 Mayor Thaddeus Kirkland read and presented firefighters Steven Carr and John Albany with the letter, which detailed their assistance with a water-rescue in Darby Borough last August when remnants of Hurricane Isaias battered the area.

During the meeting, Darby Borough Police Chief Gabe congratulated the men and thanked the fire department for its assistance. “With the flooding going on that day and people being trapped, it was very concerning, and who knows what would’ve happened without your fire department assisting us that day,” said Chief Gabe. “I want to thank them and Commissioner Rigby, who answered the phone that day and told us, whatever we needed, he would assist us. If your department didn’t get there when they did, who knows what we would be talking about today.”

On August 4, 2020, Chester Fire Commissioner William Rigby IV received a call from Chief Joseph Gabe requesting help.  Two children and five firefighters were trapped on the second floor of a home that was surrounded by rising, fast-moving floodwaters.

Firefighters Carr and Albany, both trained in swift water rescue, were dispatched to assist.  Once at the location, Carr and Albany, with the assistance of two police officers from the Philadelphia Police Department’s Marine Unit, launched the Chester Fire Bureau’s Marine Unit zodiac boat.

In just under 10 minutes, while facing fast-moving, debris-cluttered floodwater, the firefighters successfully completed three crossings in the zodiac unit to rescue the trapped children and firefighters.

“I’m very proud of these guys and happy that we could step up and help to avert a potential disaster,” said Commissioner Rigby. “A lot of people may not know that our job to serve the community extends beyond the scope of fighting fires and this is a testament to how our training and expertise makes an even bigger difference.”

Steven Carr, a 31-year-veteran, recently retired from the Bureau of Fire department in December 2020. With nearly ten awards and honors dating back to the early 1990s, he is arguably one of the most decorated members in the history of the Chester Fire Department.

John Albany is a 17-year-veteran who began working for the fire department in January 2004.