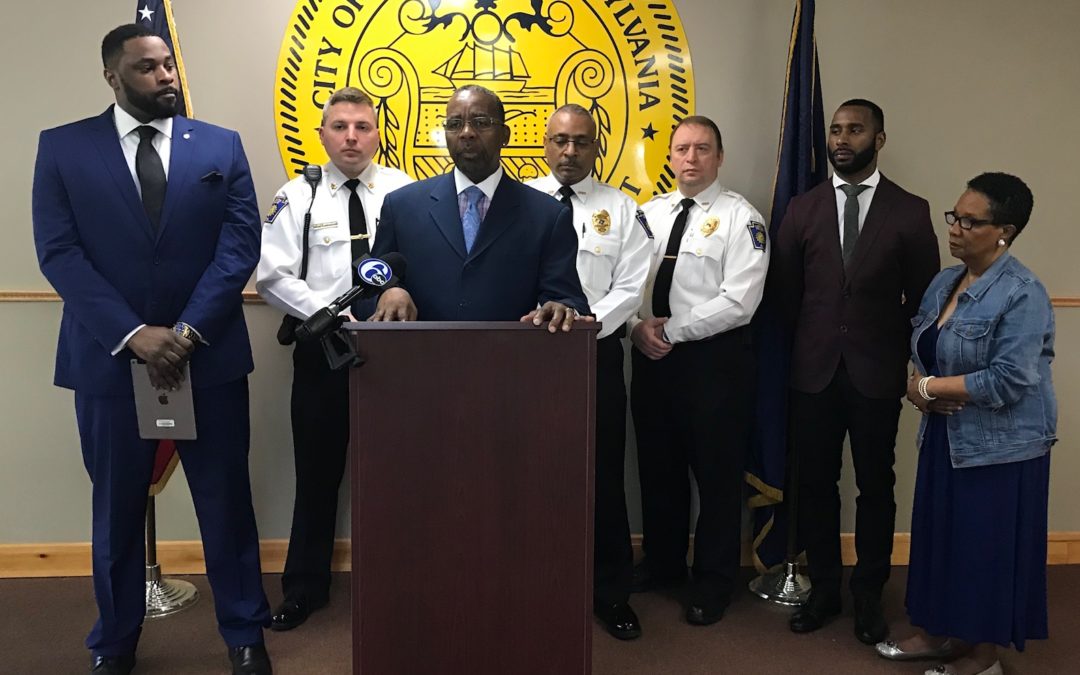 Picture Caption:  Mayor Thaddeus Kirkland and State Representative Brian Kirkland (D-159) jointly held a press conference to announce the approval of a $240K Keystone Communities Program grant, that will be used for the purchase and installation of camera surveillance equipment in high-crime areas throughout the City of Chester.

(CHESTER, PA) – Mayor Thaddeus Kirkland and State Representative Brian Kirkland (D-159) today jointly announced, the approval of a $240,000 Keystone Communities Program grant by way of the Department of Community and Economic Development (DCED).  The six-figure grant will be used for the purchase and installation of camera surveillance equipment to assist the City of Chester with completing its “Security Initiative Project.”

Speaking during a late morning press conference, Mayor Thaddeus Kirkland referenced his 2016 Mayoral Transition Report’s Pubic Safety Platform that highlighted his desire to complete the city’s on-going camera system project.  “The purchase of new camera surveillance equipment by way of this grant will compliment several other camera initiatives,” said Mayor Kirkland. “Those initiatives tie into a network and have been supported and implemented through our partnerships with Widener University, the Riverfront Alliance of Delaware County and the Chester Housing Authority.”

Mayor Kirkland also expressed his gratitude to State Rep. Brian Kirkland for being an integral factor in the city receiving the allocated funds from the Commonwealth of Pennsylvania.

State Rep. Kirkland, who represents the 159th Legislative District, which includes the City of Chester, briefly reflected on several conversations that led him to the offices of state officials, concerning the city’s need for state funding to complete the Security Initiative Project. “I’m passionate about every city, town and borough that falls within the 159th District.  I am in this area multiple times a week. I speak to city leaders regularly. I am in constant communication with the people I serve. I understand their concerns,” said Rep. Kirkland. “Those conversations were essential in my decision to advocate for the funding.  My duty is to bring resources to the area and I was adamant in my conversations with state leaders that the City of Chester is in need of state monies.”

With the Keystone Communities Program grant, the city will look to purchase 16 cameras.  “I have spoken with city officials and the city engineer about strategically placing those cameras in our high-crime areas,” said Police Commissioner Otis Blair.  “We will focus our efforts in outfitting most of the city’s west side with this equipment. We hope that these cameras will be a deterrent to criminals and help increase our department’s ability to apprehend suspects.”

In 2015, a collaborative effort between the Riverfront Alliance of Delaware County and Widener University helped to secure a $750,000 PennDOT grant to assist with camera surveillance needs throughout Chester.  To date, there are approximately 110 cameras that have been installed primarily on the east side of the city as a result of the grant.

Additionally, the Alliance has secured more state dollars to assist with the city’s camera surveillance project.  In 2017, the Pennsylvania Commission on Crime and Delinquency (PCCD) awarded the Alliance a $150,000 grant that is being used to purchase approximately 20 more cameras.

“I think if we take a step back and assess the progressive steps that city leaders and stakeholders have and are taking to address public safety concerns, residents can see that we are moving in the right direction,” said Kirkland.  “I will always look at ways to protect the people I serve and enhance their quality of life.  This administration believes that teamwork is essential to doing so, as seen in the partnerships that exist within our Security Initiative Project.”

Department of Community and Economic Development:

The Department of Community and Economic Development’s mission is to encourage the shared prosperity of all Pennsylvanians by supporting good stewardship and sustainable development initiatives across our commonwealth. With a keen eye toward diversity and inclusiveness, we act as advisors and advocates, providing strategic technical assistance, training, and financial resources to help our communities and industries flourish.

The Keystone Communities (KC) program is designed to encourage the creation of partnerships between the public and private sectors that jointly support local initiatives such as the growth and stability of neighborhoods and communities; social and economic diversity; and a strong and secure quality of life. The program allows communities to tailor the assistance to meet the needs of its specific revitalization effort.